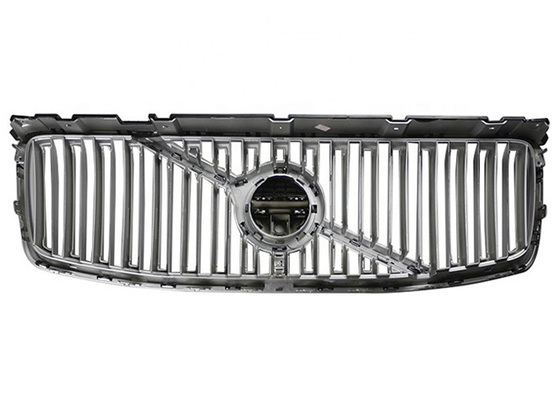 The exterior design of the 2021 Volvo XC90 draws inspiration from the Scandinavian aesthetic design language, with a short, tight front overhang, a straight, three-dimensional radiator grille and a central VOLVO logo set into the center, which is complemented by striking "Thor's Hammer" LED headlights on both sides. Continuing the brand's dual-appearance strategy, the Volvo XC90 is available in two different styling variants: Luxury and Sport. The Luxury Edition features a recessed chrome front grille; the Sport Edition features a blacked-out matrix grille with high-gloss bezels, complemented by glossy black exterior mirrors.

The interior is designed with a new Ash wood trim on the cockpit with the royal Orrefors crystal gearshift lever.
Hall of Fame Sound System
The sound system, with 19 speakers from the Bowers & Wilkins® Hall of Fame audio system, can be switched between four professional-grade music enjoyment modes.
Clean Cabin, dedicated to creating a pleasant and healthy driving experience, thanks to the addition of the CLEANZONE® Clean Cockpit's AAC dual-action enhanced air purification system, the XC90 blocks up to 95 percent of harmful PM2.5 particles in real-world road conditions.
48V Mild Hybrid Powertrain
The B5 and B6 models are equipped with a new generation of 2.0T turbocharged engine, introducing a 48V mild hybrid powertrain with an 8-speed automatic transmission. 250 hp and 350 Nm of peak torque for the B5 model, with a low combined fuel consumption of 7.7 liters/100 km, achieving the harmonious unity of high energy consumption and low consumption. The B6 model replaces the traditional mechanical supercharging with electric supercharging, which provides better power response and torque performance at low rpm, with a maximum power of 300 hp and a peak torque of 420 Nm with the support of dual supercharging, and accelerates to 100 km in 6.7 seconds. The RECHARGE T8 model achieves 5.8 seconds of 100 km acceleration and a combined fuel consumption as low as 2.2L/100 km.
Third-generation City Safety system
Inheriting Volvo's strengths in safety, all models are equipped with the third-generation City Safety and Pilot Assist systems as standard. Among them, the City Safety City Safety system adds the reverse car side warning and automatic brake stop function, as well as the front seat belt pre-tightening function when the collision of large animals in front cannot be avoided.
Volvo XC90
On July 8, 2015, the Volvo XC90 was officially launched in Shanghai.On July 10, 2017, Volvo Cars announced the official launch of the 2018 XC90, with seven new models and a model lineup consistent with the 2017 model.The 2018 XC90 comes standard with a 7-seat 2+3+2 layout from the T6 Smart Elegance Edition and above, while the top-of-the-line T8 Honor Edition has a 4-seat Layout.
The new Volvo XC90 was unveiled on September 5, 2019.
In 2019, Lang Lang became Volvo Cars' Global Brand Experience Ambassador.
On September 4, 2020, the Volvo XC90 21 models were upgraded and launched, with the 21 models offering a total of eight models in three power configurations, B5, B6 and RECHARGE T8,[82] with a length, width and width of 4953mm*1958mm*1776mm respectively and a wheelbase of 2984mm.

Our products are sold all over the world, you can rest assured.

描述 描述
Get a Quote